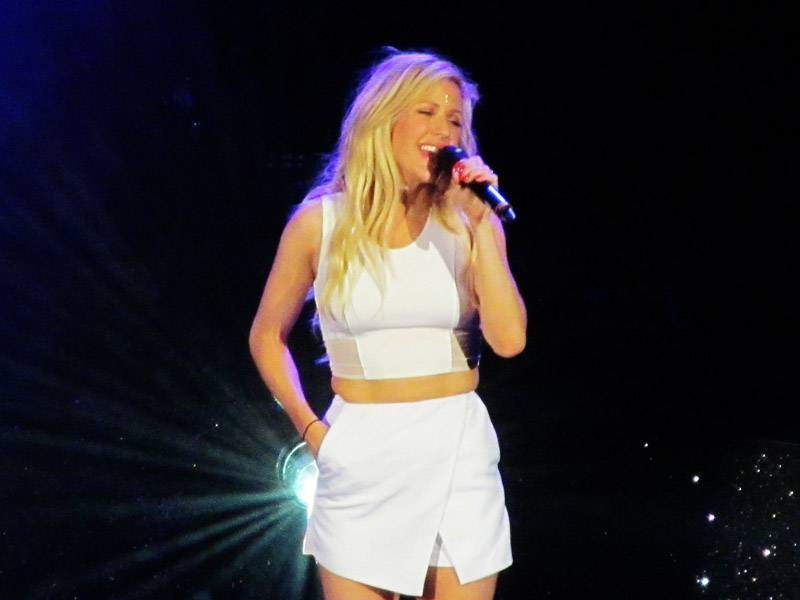 Back in 2011 when Karen On was still an all-entertainment blog, I saw mentions of Ellie Goulding‘s name amongst my Internet friends, which prompted me to buy her debut album Lights on iTunes and check her out at a free in-store performance and autograph signing at Amoeba Music here in San Francisco. I wrote about both the record and the performance on my blog shortly afterwards. In my review of Lights, I wrote, “A well-rounded singer-songwriter with a unique, celestial flavor of music, it’s simple to see why international audiences adore her—and difficult to figure out why she doesn’t have a bigger U.S. following.”

Unbeknown to me at the time, Ellie was actually just on her way to achieving that following: She had booked Coachella, made the late night talk and variety show rounds as a musical guest, and performed at Prince William and Kate Middleton‘s wedding reception. It wasn’t until the track “Lights” had REALLY blown up on top 40 radio later that year or early the next year that I noticed more people around me started talking about her. More collaborations surfaced, another album was on its way, and she began playing more shows at bigger venues. I saw her twice last year—as a headliner in February at the Fox Theater in Oakland and as a supporting act for Bruno Mars in the summertime at SAP Center in San Jose. Both times, I kept thinking about that small intimate record store performance in 2011 and how it was surreal to see her performing full sets with a full band at theaters and arenas.

I don’t have that hipster mentality of “I liked so-and-so before they were famous!” and look down on newer fans. Sometimes I’ll tell people I saw Ellie perform live at a record store before she blew up and that I got to hug her because who else may have had those opportunities? Folks find it cool. I always thought that if you were a true fan of an artist, you’d be genuinely happy for them when they hit it big. You’re allowed to feel like a proud mom or pop without being an ass about it. That proud mom feeling washed over me this past Saturday as I watched Ellie perform to a huge sold-out crowd at San Francisco’s Bill Graham Civic Auditorium.

A big venue meant lots of lights, visual effects, interludes, and more loud noises in general, but the bigger production was never a distraction from Ellie’s vocal prowess and her band’s outstanding accompaniment. I was very impressed with how she changed songs up and sounded very strong throughout. I was especially excited that she sang so many of her older songs that I have never heard live: “This Love (Will Be Your Downfall),” “The Writer,” “Every Time You Go” (Although a couple of these were just sang partially as part of a long mash-up).

One section of the show contained just all of her slow lovey-dovey songs in a row. This section contained my favorite performance of the night: a stripped-down version of “Beating Heart,” one of her songs from the Divergent soundtrack. So pretty!

Although the crowd was into the show throughout, Ellie told everyone not to hold back for the last part of it, which I called the dance party section of the concert. So I danced [awkwardly] as I watched the super energetic floor crowd in amazement as Ellie performed “Anything Could Happen,” “I Need Your Love,” and “Lights,” followed by the encore of “You My Everything” and “Burn.” It was basically one giant rave and there was nowhere else I wanted to be.

Honestly, I didn’t know the little English fairy-like girl I met very briefly three years ago would become the electropop phenomenon she has become. Not in a bad way—simply put, the music industry is difficult. Some artists start out and keep a small devoted following while others build a large one over time. You just don’t know what to expect. But I’m glad this one got that bigger U.S. following she deserves, and then some. Watching Ellie grow as an artist and performer has been such a fun journey. I look forward to our next heart wrenching serenade / giant happy rave together.