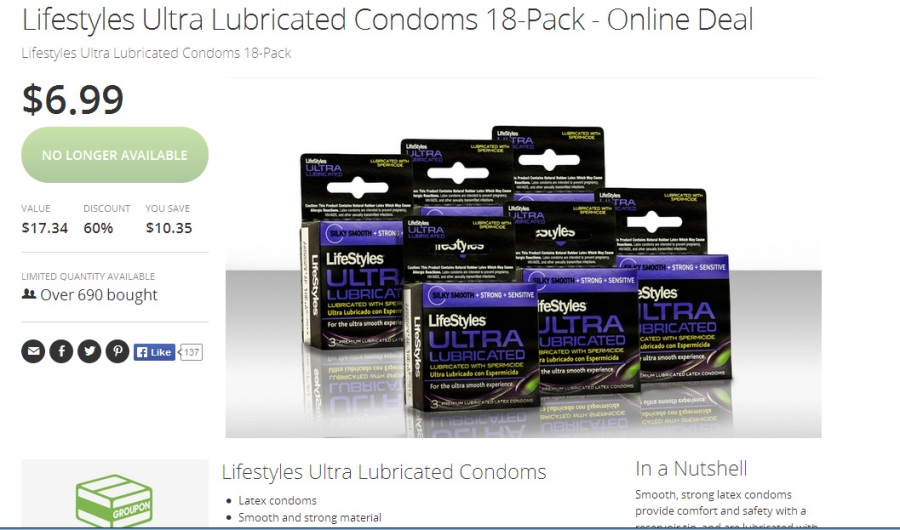 Sometimes things involving penises, sex, hygiene, and basic bodily functions are amusing, except when I’m on the bad end on all of them. I’m not saying I’m going to need condoms and wipes for guys anytime soon and even if I did, buying them on Groupon would be the last thing on my mind. Thanks to the creepiness of my Facebook news feed, I saw this posted on my coupon and discount-obsessed friend’s wall from one of his friends:

What a bargain, right?! Eighteen condoms for the price of about six! If I had acted sooner and took advantage of this deal, I would’ve saved up enough to buy a burrito bowl and soda at Chipotle for a fabulous pre-sex meal! And they’re not just any condoms, they’re ULTRA LUBRICATED.

Let’s go through some of the bullet points in the product description to see what else is so special about this deal:

After I relayed this fun find to my Twitter followers, said friend Tweeted me another funny link his friend posted to his wall:

So, apparently male hygienic wipes are a thing and there’s a brand of them called Dude Wipes. A label in the front of the box basically tells guys they are stinky and to buy them. Kind of rude! But the product description on the Groupon deal is absolutely golden:

These soft, scented wipes help keep dude parts cleaner than toilet paper alone. Each one contains aloe, chamomile, and childhood lullaby extracts to soothe skin as the flushable wipes cleanse. The wipes are also a great option for post-gym cleanup or just to refresh your hands or face. Since they’re individually wrapped, you can take these to work, your significant other’s apartment, and on the road while traveling.

Okay, they got me on “childhood lullaby extracts” and that this is part of the Fresh Dude scent. What even? Well, dude, I’m not sure if I want my man to smell like a little boy because that’s what it sounds like. I also like how they make it so obviously about sex when they mention “your significant other’s apartment.” I like how they assume that I have an apartment. I could be living in a basement or an igloo for all you know.

Finally, my friend passed this one on to me:

And I’ve officially seen it all. At least whoever wrote up the product description had an incredible sense of humor about it:

After it’s sanitized, the hygienic accessory can be stored discreetly within a bag or conspicuously atop one’s head.

And in the bullet points: “Doubles as emergency lacrosse basket”

I think I will get these to use as funnels for some cocktails. But first, maybe I’ll crudely stuff the ultra lubricated condoms inside them, then wipe off the urinals with the Dude Wipes and flush away the evidence. Sounds about right.

(Thanks E. for tipping me to these!)