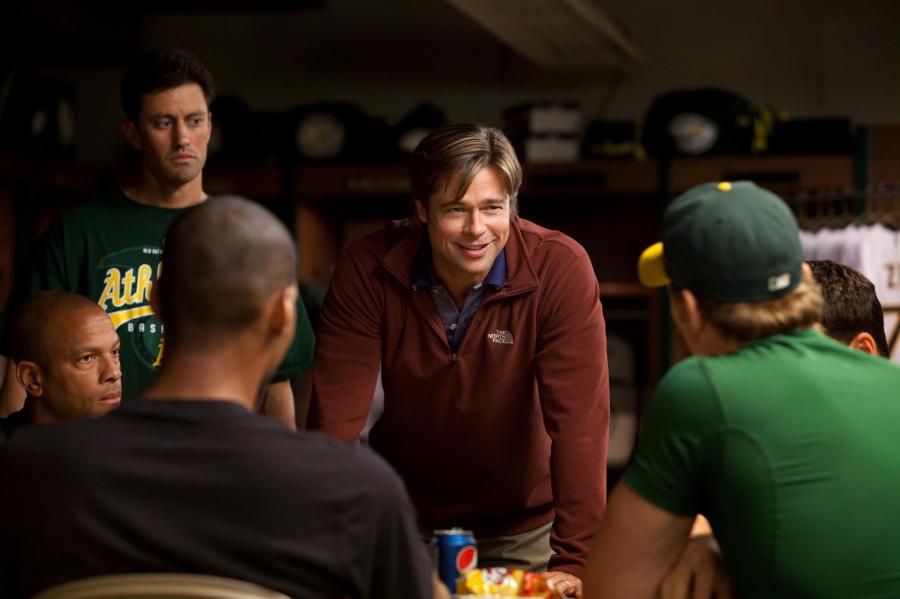 For a film about defying the odds, what Moneyball accomplishes in filmmaking is odd-defying and astonishing in itself. The story about the struggling 2002 Oakland A’s quest to become a championship team ends with a heartbreaking result, but watching it unfold on-screen is uplifting anyhow. The true-life tale of how A’s general manager Billy Beane restructured his team is a remarkable feat alone, and it is recreated through cinema with unwavering spirit. The statistics-laden book by Michael Lewis, which recounts Beane’s challenges, is transformed into a quick-witted and mesmerizing screenplay by Steven Zaillian and Oscar winner Aaron Sorkin. Add in incredible cast performances and some seriously breathtaking on and off-the-field drama, and you’ve got yourself a first-place film.

In Moneyball, Beane (Played by Brad Pitt) is coming off the A’s painful postseason loss to the New York Yankees in 2001. His key players are now free agents, and he must figure out to replace them. The problem is that the franchise has a very small payroll. However, when he meets whiz kid Peter Brand (Jonah Hill), Beane is introduced to new methodologies, allowing the team to acquire talented and undervalued players on their limited budget. Beane hires Brand to become his assistant general manager, and the two form an innovative partnership that will change the business of baseball.

Pitt and Hill make up an unlikely dream team, both as their characters and as actors working together. Beane and Brand are from different ends of the spectrum—Beane as a former and failed Major League player and Brand as a recent Yale graduate and in a clerical assistant position. However, they share much in common: They’re both smart and they both struggle with their attachment to the players, knowing they’ll have to deliver the news face-to-face if one gets traded or designated for assignment. Hill plays Brand with kindness and sensitivity but still has a quirkiness found in his more comic roles. It’s not entirely a stretch for him, but it’s notable for his first role in a drama.

Pitt dissolves into his character with a perfect balance of confidence and vulnerability. In addition to showing him as the A’s general manager, Moneyball portrays Beane as a divorced father to a 12-year-old daughter. It’s a sweet and humanistic touch to the film, and Pitt really embodies Beane in these different aspects of his being. He and Hill both are strong individual performers here. Together, they’re naturally compatible in their scenes and with the other characters, turning in some genuinely light-hearted moments as well as sentimental ones.

Baseball fans will especially enjoy all the real-life footage integrated in and the locker room action, the dugout dramatics, and the games that have been recreated. Even if many of the games shown aren’t the actual games, they are shot and executed in such ways that will deliver the anticipation and anxieties found in real games anyway. And even if you don’t enjoy baseball, it’s hard not to feel something in watching the team and the protagonists win or lose and trying to overcome adversity. Additionally, the insight into what happens in a franchise’s front office–the scouting, the trades–is fascinating. It’s easy to make a film about baseball, but a film about the business of baseball can be tricky. Luckily, Moneyball is intelligent and thorough as it is fun, engaging, and even wistful at times.

The only weakness of Moneyball is that the dialogue can be tough to follow, particularly if you’re unfamiliar with baseball. Nonetheless, the underdog appeal in this unique kind of Cinderella story will resonate with sports and non-sports fans alike. By the end, you will probably be nodding in agreement with Beane when he says, “How can you not get romantic about baseball?” because as this movie shows, it’s hard not to get romantic about it.

Originally posted in response to a prompt for a writing sample.

One thought on “‘Moneyball’ hits one out of the park”