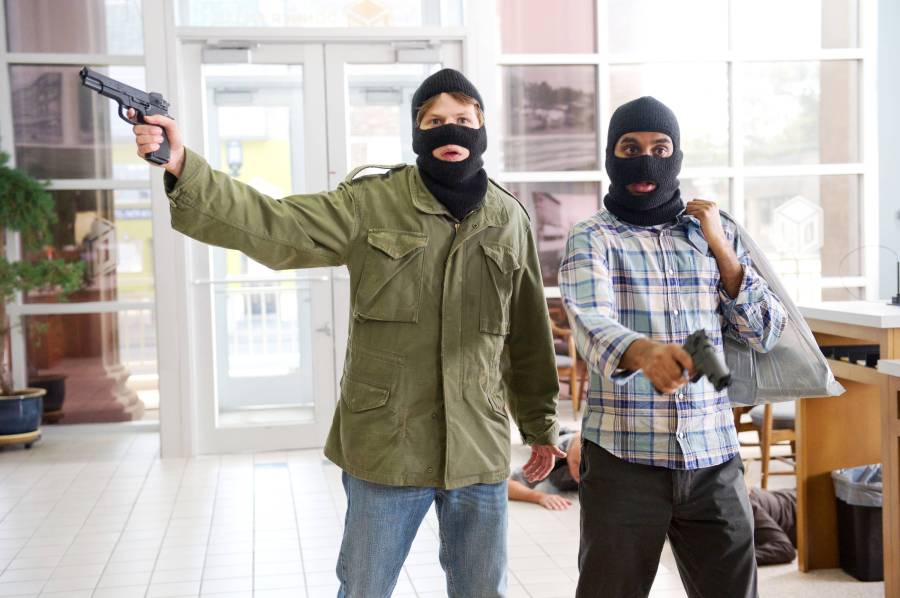 It’s a rather dark situation at hand in 30 Minutes or Less: Guy plans to murder his father for money, must get money he doesn’t have to hire a hit man first, and gets another unsuspecting person to help him get that money by strapping a bomb to him. However, when there’s miscommunication involved as well as airheaded folks to begin with, hilarity ensues. Rather than 30 Minutes or Less, the film runs at a little under than an hour-and-a-half, yet feels like a lengthier two hours. It’s not necessarily a bad thing, since the adventure and antics are quite funny in their own twisted way. It’s bad that it drags on more than it should, then rushes its frenzied yet disappointing last tick marks.

Still, compared to other wild comedies that have gotten and are currently getting their time in a theater this summer, 30 Minutes or Less is one of the better ones, combining outrageous slapstick with a tense crime plot. Plus, the cast is well-utilized in roles tailor-made for them. Director Ruben Fleischer reunites with his Zombieland lead Jesse Eisenberg to deliver another black comedy that’s a tiny bit lighter on the doom and gloom, heavier on personal interest. Eisenberg portrays Nick, a young pizza delivery guy from Grand Rapids with a longtime best friend in Chet (Aziz Ansari), a substitute teacher. Meanwhile, somewhere else in town is a physically lazy but entrepreneurial-spirited 30 or 40-something-year-old man named Dwayne (Danny McBride), who’s constantly under the verbal attacks of his rich ex-Marine father (Fred Ward). One day, Dwayne gets the idea to murder his father as a means to not only get him off his back, but also for his inheritance so he and his dumb friend Travis (Nick Swardson) can start up their tanning business. They hire a hit man (Michael Pena, probably the strongest point in the talented cast) that they must pay thousands of dollars beforehand and despite something usually clouding their judgment, Dwayne and Travis do foil an innovative plan: To coax Nick into delivering pizza in order to meet him and use him to rob a bank. They strap a time bomb to him and give him ten hours to get the money before disintegration. Panicked, Nick gets Chet to help him, and two pairs of buddies embark on some heists. Co-starring is Dilshad Vadsaria as Chet’s sister and Bianca Kajlich as a key figure in the plot.

As annoying and vulgar as the characters are, the actors are effortless in the humor they bring into their roles and therefore to the movie itself. The four leads are outrageous and boisterous and seem so at ease doing and saying all that is expected of them and more. Eisenberg, who we all know received his first Oscar nod this year for The Social Network, even shines in some deep, heartfelt moments that cut some true drama into the movie, as Nick knows that he may not be able to live and tell a loved one how he really feels. Then he goes on with the plan to defy all odds. Pena, as previously mentioned, arguably gives the best comedic performance. Known more for his roles in dramas like Crash and Million Dollar Baby, he shows that he indeed has great comedic chops in a role that also allows him to be the tough guy. The scenes of violence and action—car chases, shootings, the bank robbery—deliver the thrills and some realism, but eventually dissolve into the general laughfest.

And as far as that general laughfest goes—for some, it will make your tummy hurt and for others, it will make your tummy hurt for all the wrong reasons. There’s no question about its raunchiness (Moreso in dialogue than content) and its humor is sick, touching on things that shouldn’t be joked about. In fact, I should mention that this film is under fire for bearing a resemblance to the 2003 case of Brian Wells, the Erie, PA pizza delivery man who was thrust into a similar situation as Nick in the film, and ultimately died when the bomb detonated. Though the frustrations are understandable, when I meant “sick humor,” I meant Family Guy type jabs. If you’re relaxed with your personal definition of humor, and you also don’t mind hearing the F-word about 300 times straight, you’re more likely to enjoy it. But even if so, the pacing and execution of some scenes, along with schticks that can become tired to the viewer, make the film an uneasy watch, and that’s what can be just a little bit more offensive than anything, that it fails to deliver something better. Maybe it was given its title for the reason that it packs so much into so little, yet still feels like a long string of nothing at times (And yes, I do know the obvious reason for the title is the pizza place’s service guarantee).

In light of its controversial matter and shortcomings in its storyboards and script, 30 Minutes or Less still manages to give a big glimmer of a good time in the summer comedy field. Although it’s not entirely original, it does avoid a recycled plot and really pushes some buttons to be one of the more genuinely hilarious and unique movies among its competitors. Also, the pool of talent there is sensational and they really show their (comic) stuff. The time on your watch will tick a bit stubbornly, but it will be time gone on something you just might end up enjoying.