There is amore in the air for this edition of Movie Night In, from a classic love story in the villas of Italy to every formation of it—the sexy kind, the adolescent kind, the love of the family, everlasting love, and even admiration for an artistic muse—throughout the boroughs of New York City. But even if you’re not in these places, these films will make you want to believe that love is everywhere.

Gary Winick, the director of heartfelt romantic comedies such as 13 Going on 30 and Bride Wars, adds another adorable chick flick to his body of work with last year’s Letters to Juliet. Amanda Seyfried stars as Sophie, a fact-checker and aspiring writer with The New Yorker. She and her fiance Victor (Gael Garcia Bernal), a restaurateur, head to Italy for a “pre-honeymoon,” which in actuality means a crash course for the soon-to-be Mr. Sophie in perfecting more recipes and running a business. As Victor keeps himself occupied, Sophie creates her own adventure when she discovers the Secretaries of Juliet, a group of women who respond to letters left at Shakespeare’s most famous heroine’s Verona courtyard. She is stoked to receive and respond to a letter written 50 years ago and when she meets the writer of the letter, an Englishwoman named Claire (Vanessa Redgrave), there’s nothing that Sophie wants more than to help her find her lost love. Along the way, the New Yorker herself makes her own revelations about romance. Christopher Egan and Franco Nero co-star.

Although the script felt empty a few times, the acting is sometimes flat, and the story is as predictable and its premise as unrealistic as most romantic comedy-dramas are, Letters to Juliet is a very sentimental and sweet film. There’s some nice comic relief between Seyfried, Redgrave, and Egan and with the people they meet during their journey, but mostly, it’s a cute love story that fills hearts for the hopeless romantic in all of us. Seyfried’s Sophie is one of the most intriguing heroines in this kind of hit-or-miss genre, serving as a trailblazer for a woman searching for her old flame while embarking on her own road of self-discovery—a Juliet of duality, if we may.

On the surface, Letters to Juliet isn’t all that special, but it’s difficult not to be moved and have your heartstrings tugged at by this modern kind of fairy tale. Have tissues ready if you tend to tear up during sappy, ultra-sugary romances. 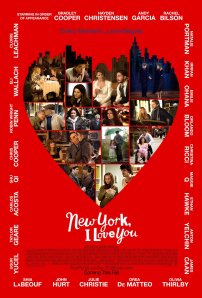 Then in the Big Apple, ten different directors attempt to tell ten different stories of love in New York in the aptly-titled 2009 anthology New York, I Love You. Although all the vignettes somewhat connect, each of them are meant to stand on their own. Directors include Allen Hughes (The Book of Eli), Mira Nair (Vanity Fair), and Brett Ratner, and Hollywood well-knowns from Bradley Cooper, Rachel Bilson, Natalie Portman, and Orlando Bloom to Chris Cooper and Cloris Leachman share the spotlight.

However, for quite a talented list of actors and fine directors, New York, I Love You is highly flawed. The editing is messy and it’s due in part of the unnecessary interconnection of characters and interludes. While each director does at least an average job showcasing a different side of love, concentrating on a specific neighborhood in the city, a bad segment can really slow down the pace of the entire film, which can be blamed more on the writing than directing. One key case would be the segment featuring Ethan Hawke as a writer hitting on a call girl (Maggie Q), where he explains in quite sexually explicit (And if I recall, anatomical)  terms the things he wants to do to her. The acting was entertaining, but the dialogue was cringeworthy. And you can say, “Well, she’s a hooker!” but SPOILER ALERT—this happens after she admits what her profession is. Some segments are a little more cliche, though the prom story starring Anton Yelchin and Olivia Thirlby comes with an amusing twist. The most intriguing piece is the segment starring Julie Christie, Shia LaBeouf, and John Hurt in a haunting hotel room semi-tragedy. It’s certainly the most out-there of the ten short films, but was a very interesting and chilling highlight of the overall disappointing anthology.

New York, I Love You could have been an excellent film with better direction, editing, dialogue, and more substantial and in-depth stories. There are some great moments but overall, don’t let the star-studded cast heighten your expectations. I love New York too, but I don’t have much love for this unmemorable 100-minute long montage.