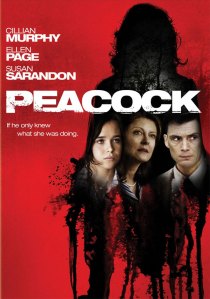 Although Peacock features many big names from Hollywood, the film has never seen life in a cinema. Instead, this feature—filmed in 2008—has only been able to hit DVD shelves and Netflix shipping facilities earlier this year. But it’s not that bad at all, really. This dark and disturbing movie is definitely worth checking out.

John Skillpa (Cillian Murphy) is an oddly quiet bank clerk living in the fictional small town of Peacock, Neb. When a train runs off its tracks and into his backyard, the members of the little rural area come across a woman there named Emma, who they immediately assume is John’s wife. However, Emma is not the other half of John in that sense—she is another personality that John takes on himself. Suddenly thrust into the spotlight due to the accident, John starts to descend into a downward spiral as he struggles to hide his secret. Further feeding the flame is Maggie (Ellen Page), a young mother (Nope, not Juno, although I would like to think of it that way in relation to all of Page’s most recent and notable roles) and a key figure from John’s past. Susan Sarandon portrays a politico’s wife that reaches out to both John and Emma. Josh Lucas, Bill Pullman, and Keith Carradine also co-star.

The editing (By the late Sally Menke) in the movie was solid and the score and sound effects were chilling. In fact, ‘chilling’ could be the word to describe the most positive aspects of Peacock. In addition, and taking out the complaints that there were quite a few plot holes and that more story development could’ve made its way into the final product, the psychological drama is intriguing, shocking, and tragic. It also serves as a thought-provoker, making you wonder why the main character is the way he is and what his next move will be in the battle against himself and the small world around him. But even with its story told against a lonely rural backdrop and with eerie music sounding in the background (Oh, and the fact that two principal actors from Inception are yet in another movie together), it’s Murphy’s riveting performance as the dual personalities that makes the movie. As John, he’s painfully troubled, vulnerable, and trapped in his own mind and as Emma, Murphy embodies the single, darkest element of the film. The characterizations in Peacock truly allow this actor to showcase his massive talent.

So the pacing and the development is not at its best, but everything else—particularly the premise, the editing, the score, the emotions you might feel and the thoughts you will think, and Cillian Murphy—makes Peacock worth one or a few of your feathers.